You don’t need to get a job in world, or buy Linden using your Paypal or credit card to look good in Second Life. Here are a few tips & tricks to finding decent freebies in Second Life & on the Marketplace.

Also if you are still under 30 days, FabFree has a great list of stores that give things away to new users so I suggest checking it out.

The Marketplace can be a great place to find freebies, but it can be a bit confusing when you’re new. Using keywords like free, freebie, gift are what will help the most here. If you have a few linden, you also search ‘dollarbies’ which are items that usually cost 1L.

The lunchtime crowd enjoyed themselves today, rollin’ the dice and trying their luck. 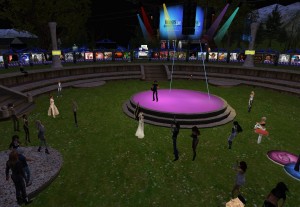 The Second Annual Metaverse Live Music Expo starts this week. More than 80 musicians will be playing live music over three days. If you haven’t experienced live music in Second Life before, this should be a great place to start.

Each performer has a kiosk set up in the circle surrounding the main stage so you can learn a bit about who will be performing and pick a time to visit then or just turn up any time between 9.30am and 10pm SLT Friday-Sunday and enjoy the show. 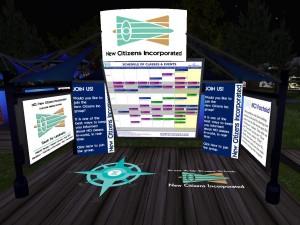 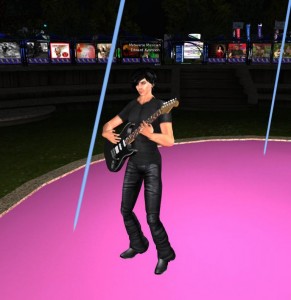 Pyewacket Bellman has again produced one of her wonderful Machina’s for our recent birthday party.

NCI has a variety of locations spread throughout the world of SL, but the rules for these locations remain the same; no nudity, weapons, or spam,Â  and in general don’t be a jerk.Â  There are others of course, but the general gist of them all is to keep the area user friendly for all.Â  Thus the reason for PG standards even when located on Mature sims.

So the questions that come up are what is PG?Â  Where do we draw the line? And who is the one that draws it?Â  Yes there is a hierarchy of command in NCI, but I bet if you poll those involved in the BOD and such even amongst them you will find varying opinions on where the line should be drawn between PG and Mature.

What’s the best solution?Â  Not sure that there is one.Â  But there are some things that if kept in mind would smooth the path greatly.Â  First thing to remember is that we are all there to have fun, but that our way of fun may not be the same as that of somebody else.Â  There is an extremely diverse group of people in SL and as such there will be an extremely diverse set of ideals.Â  Next, we need to remember that even though we have the right to enjoy ourselves, that our enjoyment may affect those around us.Â  A great example of this is gestures; some people love them and some people hate them, but whoever is within 20m of them gets to hear them.Â  Sure you could mute the person, but that doesn’t work so swift if they are a friend.Â  And the things we say in chat fall into this category as well.Â  Of course, people who don’t want to hear what you are saying can walk away or tp out of there, but when we are trying to make NCI user friendly it is not a good idea to be scaring off the newbies with our way of talking.

So the point is think twice before spouting out that joke or comment that might be considered off-color by some.Â  If you have to have your say and your say is not so PG then maybe you need to find a Mature place to say it.Â  Let NCI stay PG so that anyone can feel safe to come and learn there, not just those who can tolerate it.Â  The rules are there not to be constrictive, but to make it possible for NCI to help as many people as possible.Â  And anyone who remembers what it was like to start in SL, knows that helping newbies is a good thing.

Note for the helpful or helpless:Â  When a new citizen is asking questions about the basics of SL it is usually because they need help.Â  The problem being that there are many of us out there who continue to rant, rave, banter or blather regardless of the fact that we are probably confusing the heck out of the newcomer.Â  You will notice that I am including myself in this, because I have a tendency to make smart alecy comments in a business as usual fashion.Â  But those of us who are there to help really ought to consider that newbies are often overwhelmed, I know I was.Â  They are trying to learn a lot of new stuff all at once and it only makes it more difficult when we are chatting endlessly about our latest and greatest upgrade to our computer or whatever.Â  So I say maybe we should zip it…at least long enough for them to learn how to sit and join in 🙂

Today is a little bit of my own personal insight on not only life in SL but life in general. The followingÂ essay was written by me for my web site if I ever get one up and running. However if truly fits here just as well. It is entitled “Actions and Reactions” I hope you find it interesting.

END_OF_DOCUMENT_TOKEN_TO_BE_REPLACED

Â Â  Just a quick note on what I have planed for this BLOG, and to see how things work here. For those that have not read my profile, I do so enjoy wandering through “SL” and what I am going to try to do here is let you know where I have been and what I have found there.

Â Â  I may from time to time toss in just my randum thoughts on life (both “SL” and “RL”) they do go hand in hand.Â  I do not plan on this being very formal all in all I am still just “an ole country boy” @ heart and will slip into my country fawnits when spelling things. I was always taught spell it the way it sounds:)

Welcome to the new-fangled NCI blog, soon to be your source of NCI news and info inworld and out. Watch this space!